W2O Intern Phoebe on the Cool of Boston’s “Cool Globes”

Our W2O intern, Phoebe Racine gives us some “cool” to consider before she heads back to Dartmouth next week:

If you’ve been to downtown Boston lately you may have noticed a series of decorated earths on the Tremont side of the Boston Common, near Park St. Station and at Copley Square. Some are wrapped in knit, others you can climb inside of and one is covered in plastic debris. These sculptures are part of a campaign called, Cool Globes: Hot Ideas for a Cooler Planet. The purpose of the #CoolGlobes is to raise awareness about environmental issues and challenges us to consider our human influence on climate change. Boston is the 14th city worldwide to hold the exhibit.

Of particular interest is the globe titled “Reduce” by Israel artist Yair Engel. We see a globe covered in brightly colored plastic, plastic that holds our laundry detergent, cereal, hair products, and all of our everyday items. The “Reduce” globe reminds us just how dependent we’ve become on disposable goods. In Engel’s message at the bottom he writes that “within the past 35 years, the amount of trash each person generates has almost doubled from 2.7 lbs to 4.4 lbs everyday.” Ultimately he asks, “How can you slim down your trash can?” 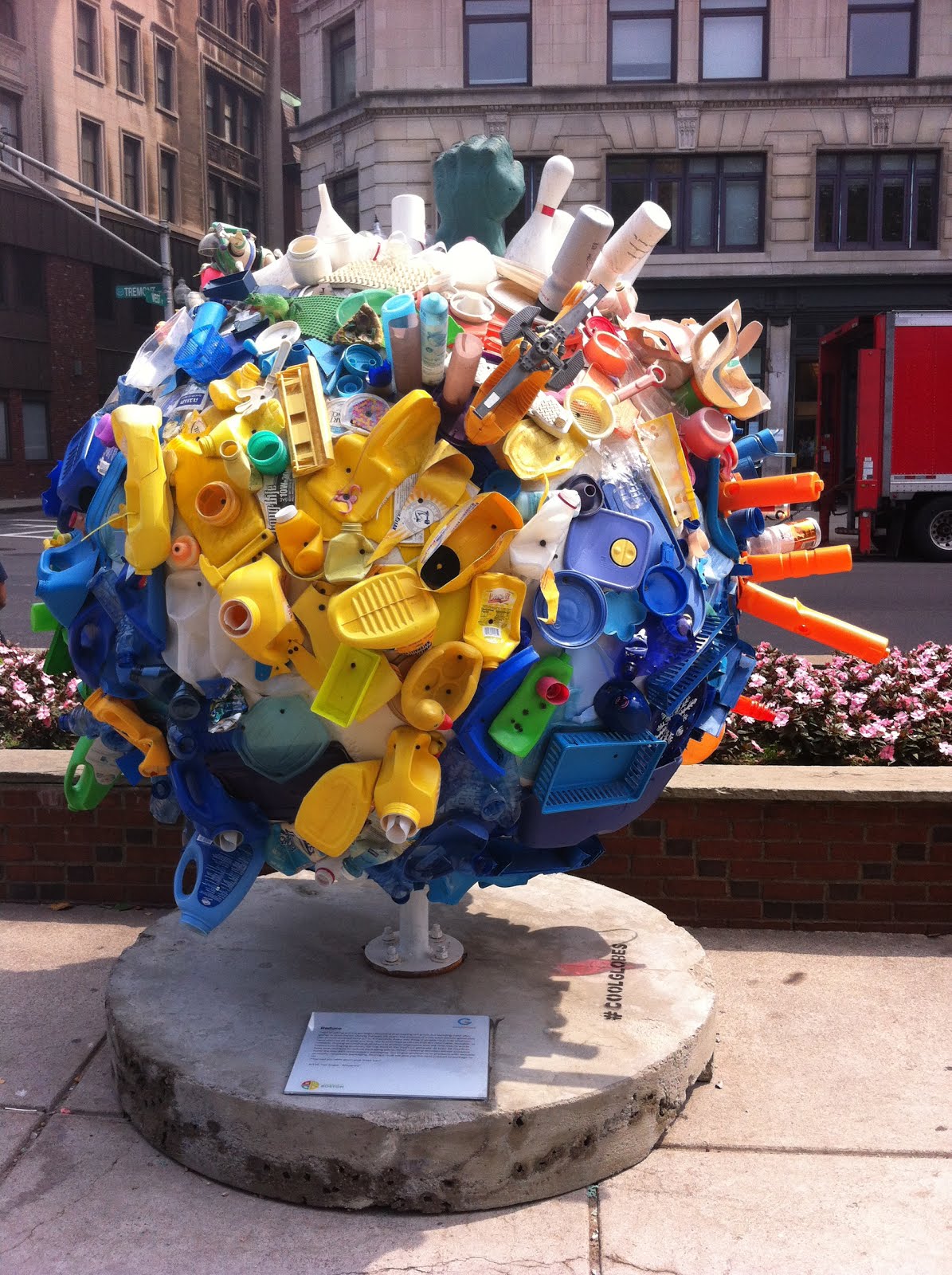 If you would like to see Engel’s globe in person it stands one block south of the Park Street Station. Or you can view globes like his online by visiting the Cool Globes The exhibit is serious yet fun-the perfect outing for the whole family. Have you ever climbed inside a giant earth statue?

A Special Evening with Celine Cousteau

Tickets are on sale now!

W2O’s Back to School Lunch Packing Tips. (Can we avoid the plastic bags?)

It’s back to school time and W2O has some simple suggestions for making choices that are good for your family and good for our environment and oceans.  Cringing at the plastic sandwich bag these days? Me too. But what are the alternatives. How do we choose and invest when our little ones might be tossing the contents in the trash?  (Some training is required) Does your teen come home without the cap to the water bottle? (And the training never stops!) W2O has some tricks, reasonably priced options (well, one extravagance! Adults need to eat too!) and easy tips for you.

There are a ton of products out there. I’ve included the ones that are less costly here.

Sometimes you do need to reach for a sandwich bag substitute-choose these!

The “Reuseit” website is handy because it has replacement caps for almost all styles of reusable water bottles. http://www.reuseit.com

W2O’s Simple Tricks; Grocery to Fridge with No Plastic

One of our W2O members recently enjoyed the guide I linked to on a previous post that helped decipher how to store vegetables without using plastic bags and wrap. She was intrigued at the idea of not using the plastic to store in the fridge but was still confused about how to transport the local produce and non packaged veggies home from the market. So, intern Phoebe and I decided to go on a shopping outing to see if we could give you a pictorial version of some simple tricks for avoiding single use plastic from the supermarket to your fridge.

Plastic is everywhere. If you are in tune to that fact, you will be overwhelmed with the amount in our supermarkets.  Even the organic markets and the Whole Foods of the world are struggling with how to avoid plastic packaging. Sometimes, even with best intentions, you can’t avoid it. Yogurts, breads, meats, some pastas, rice..well the list goes on-plastic is all around us.  Sometimes you have to just do the best you can. Here are some practical ideas that you can try to reduce the amount of plastic you take home.

Clint Richmond was instrumental in the creation and passing of the Brookline Plastic Bag Ban. He is also a member of the Green Caucus, an interest group within Brookline Town Meeting and the lead supporter of the ban. W2O intern, Phoebe Racine, interviewed Clint on July 25th.

Q. Why did you pushed for the Brookline Plastic Bag Ban?

A. There are 100 billion non degradable plastic bags used in this country every year. Plastic Bags create serious problems for aquatic life. Plastic bags from Brookline  can make their way into the Atlantic Ocean via the Charles and Muddy rivers. Our bylaw was modeled after a State Bill that has beed stalled for years, and passing it here not only puts Brookline on a sustainable path but demonstrates support for the Bill. This Brookline bylaw is simply an attempt to apply this proposed law at the local level. We also hoped it would inspire similar action across the state.

Q. How do you feel about the proposed Massachusetts Statewide Plastic Bag Ban?  Is this a law you would like to have passed?

A. Yes, I see the ban against polystyrene food packaging that we passed at the same time as equally important. Both have generated interest across the state. For example, Great Barrington and Manchester by the Sea have just passed similar bag bans.  Though, it’s important to remember that we weren’t the first town to pass a plastic bag ban.  In 1998, Nantucket passed a much more comprehensive packaging bylaw. Nantucket created a powerful model for others to follow.

Q. Do you think Brookline’s Ban will effect the current bill (H3438)?

A. Yes, because of Brookline and other towns, there is a lot more momentum than last year. Last year was good. Last year was the first time is got out of the Environment Committee.  With the media coverage and the three new towns that have passed similar bans, we have much more hope that it will pass this legislative session.

At Women Working for Oceans we have been promoting the passing of the Plastic Bag Ban of Massachusetts. Our newest member of the W2O team, Dartmouth rising senior, Phoebe Racine, went to Brookline, a suburb of Boston that has passed a municipal bill banning plastic bags, to interview businesses, find out what people think of the ban, learn how it might influence their choices and affect business when is enacted in December.

On a Wednesday in the ides of November, Brookline was the first town in Massachusetts to enact a ban specifically on plastic bags and polystyrene to-go containers. Brookline’s hope was to start a movement. They wanted to pave way for towns, cities, counties and states throughout the East Coast to pass similar bans. And start a movement they have. Since the ruling, Manchester-By-The-Sea and Great Barrington have followed suit. However, Brookline was not the first to ban one time use plastic bags, only the first to do so specifically. In 1989, Nantucket banned a wide array of plastics, including the plastic bag. Today, four Massachusetts towns have a bag ban in place. In my interview with Town Meeting member, Clint Richmond, he explained that these four towns represent 1% of Massachusetts. As for the other 98% of the state, W2O hopes that Massachusetts will pass Bill H696 and thus enact the first ever, statewide plastic bag ban.

In our push for the bag ban we believe it imperative to explore a ban’s effects on towns who have passed such laws. I went to Brookline to interview businesses and take a lay of the land. What I found surprised me.

The Brookline Town Council set the ban to start December 1st of 2013, allowing over a year for businesses to prepare. At the time, Brock Parker of The Boston Globe reported that, “As many as 90 businesses will have to deal with the plastic bag dilemma in the coming months.” The ban will affect businesses over 2,5000 sq ft in size and franchises with more than two sites within Brookline. In Brookline I spoke to local businesses and in particular businesses who I knew would be affected. I went to CVS, Stop & Shop and Walgreens and was surprised by the lack of knowledge about the upcoming ban. With less than five months before the ban is to start, I envisioned that owners, managers and employees alike would be aware of what was to come. As the first town to enact such a bill in the state, I believed that this was either exciting or unfortunate news for businesses and for people who live or work in Brookline. However, I spoke to several managers and all were unaware that there was a ban set by Town Council. (Maybe a majority of employees are traveling in to work from out of town..)Most felt that the ban would not affect their business.

After calling CVS and Walgreens corporate offices all I hear was ‘I-don’t-know-I’ll-have-someone-call-you-back.’ (Still waiting..)  A representative from the CVS Massachusetts district development office did think through the issue with me and said, “I’m not sure. We used to have a Green Bag Tag, (a reward system for using a reusable bag) maybe we’ll go back to that?”

While the reactions from store managers and representatives from corporate spoke with relative lack of knowledge or neutrality, a video published on June 24th by journalist Jonathan Satriale showed an overall positive reaction from Brookline shoppers. Set outside Booksmith in Coolidge Corner, the video “Brookline Plastic Bag Ban Reactions” captures the thoughts and statements of 10 Brookline residents. Susan Davis admitted, “I try not to use plastic bags anyway. I try to bring my own. I think it (the bag ban) will encourage me more to bring those bags.” Gary, however, reminded us, “how many people do you see carrying reusable bags? It’s all fine, but there is always another side of the coin.” Overall most residents interviewed believed such a ban will make them “more responsible.”  To watch the video: http://www.youtube.com/watch?v=b3aY_nESNIY

Do you think a plastic bag ban in your town would make you ‘more responsible?’ How do you think you’re community would react to such a ban? Please let us know!

Today I am setting you all up for some serious summer reading. Links to this New England Aquarium refresher on Climate Change is a good introduction to the more scientific facts in Science Magazine’s article “Natural Systems in Changing Climates,”  and its comprehensive list of articles that include a wide range of topics taking the mystery out of questions about the impact of human induced changes in our climate. Covered topics include the economic impact and human health vulnerability effected by our warming planet. Important summer reading from W2O.

What are you reading that might be of interest to our Ocean Loving members this summer?